Maps for the Classroom SAFE PASSAGE!

One of the most important passes in the Alps is called the Great St. Bernard Pass, named after Bernard of Menton who became a saint in the Catholic religion.  The majestic Alps Mountain Range is a notable part of the European continent.  In the past, travel between these mountains was treacherous, in the days before modern road and trains.

In the year 1029, Bernard of Menton built a hospice in the pass to shelter religious pilgrims from France and Germany traveling to Rome.  This was the lowest passage between the two highest peaks in the Alps, Mont Blanc and Monte Rosa.

People traveled through the dangerous mountain trails and passes before there were major roads in place.  Today the road is not used very much since tunnels have been built for transportation to move through.

Since the 1600’s a large strong breed of dog, named after St. Bernard, helped rescue people in the passes with snow and avalanches. These dogs were heroes of the mountain passes! 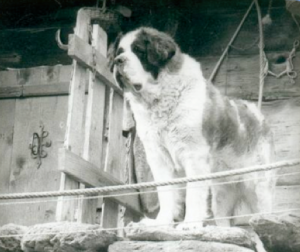 This old painting by John Emms shows St. Bernards as rescue dogs.  Today these dogs are valued as warm and affectionate pets. 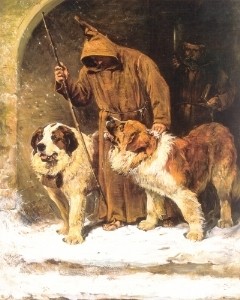 Today a hospice is still in place at the original location where Bernard of Menton established his: it is now a small monastery for religious retreats to visit.  The original old road is still in place and a more modern road passes nearby as well.  Certainly an interesting historical destination for anyone fortunate enough to be visiting the Alps! 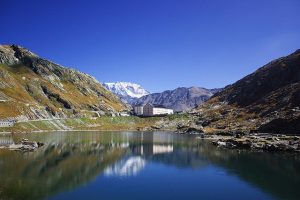 Photo: Soumei Baba, The Great St Bernard Pass and Hospice from the lake.

This text/content in the blog post is part of our ALPS file in the MOUNTAINS SECTION of our CartoCraze! digital product!

I used your maps for many years before I retired and noticed a definite increase in my students’ understanding of world activities based on physical geography. I highly recommend your maps as a learning tool.