Maps for the Classroom Penguins, Royalty of Antarctica

Penguins are the most well-known and well-loved creatures in Antarctica.  Penguins have a unique appearance give them an upright majestic air.  They are truly the royalty of the south polar region!

There are many different species of these unique seabirds, yet they all share certain characteristics.  All penguins have very thick feathers that protect them from cold.  Some penguins have as many as 70 feathers per square inch.  Even though penguins are seabirds and have massive amounts of feathers, they do not fly. They run, jump, swim and slide instead!

All varieties of penguins swim really well. Most penguins spend up to three-quarters of their time in the water where they hunt for food. Depending on their location, they eat mostly krill, fish, squid and shrimp. Most live between 15-20 years old. 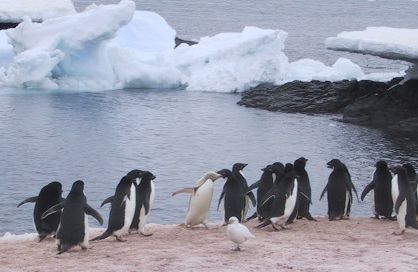 All species of penguins gather in large colonies to breed, often with as many as 250,000 pairs. Most penguins breed in the warmer months, except for the Emperor penguins which breed in winter. Most lay between 1-2 eggs.

The adelie penguin is small, often under two feet tall, weighing about 8-13 pounds.  This type can be found along the entire coast of Antarctica. The adelie has the look that most people associate with penguins. It has a white front, black head and back, with a longer tail.  This makes the bird look like it is wearing a tuxedo!  This is the look that most people envision when they think PENGUIN!

The king penguin is the second largest penguin species, on average about 39” tall and 40 pounds.   These penguins have adapted to living on rocky islands in the Antarctic Ocean. This seabird can be recognized by its bright orange markings on bill, side of head and upper chest.

The king penguin has an amazing ability to stay under water for a long time.  The current record is over 500 seconds! 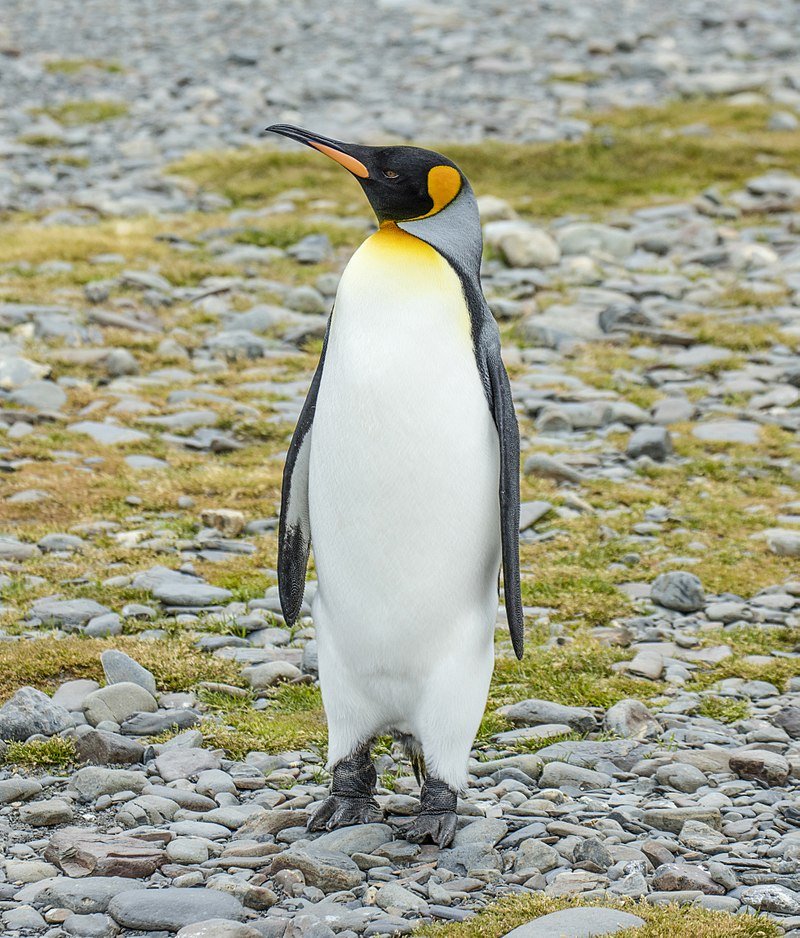 The rockhopper penguin is small, usually under 20 pounds. Because they choose to live in rocky areas, this penguin prefers to jump from place to place, rather than slide as other penguins do. They have a unique appearance: red eyes, orange beak, pink webbed feet, and yellow and black spiky feathers on their head.

Male rockhopper penguins look the same as females. The only way scientists can tell their gender is to take a DNA test of a feather. 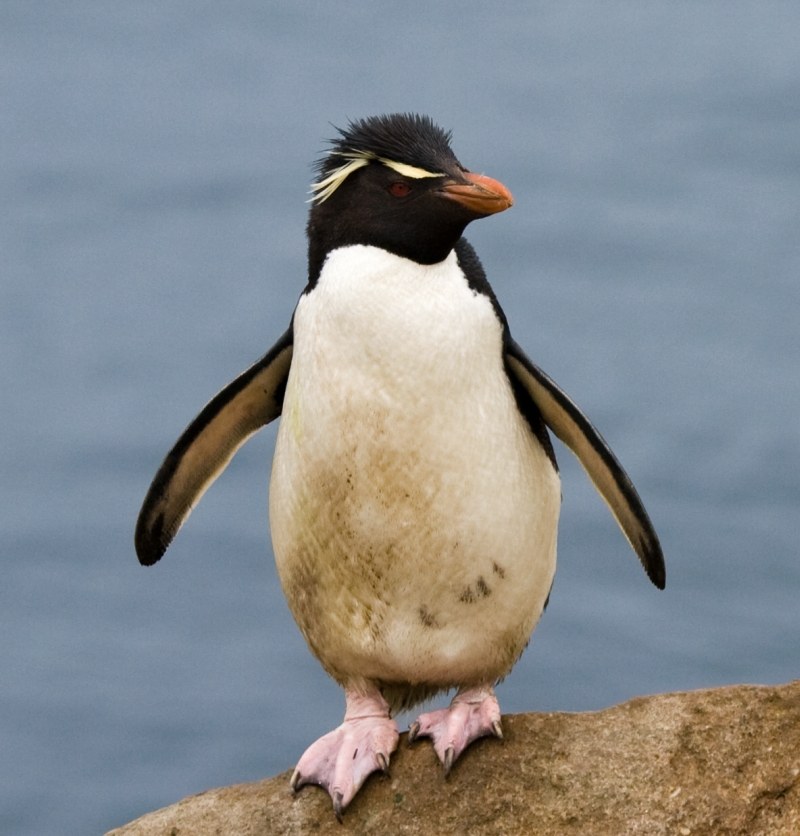 A chinstrap penguin is easy to identify because it has a black line around its face, below its beak. It looks like a strap that holds a helmet in place! These penguins live on rocky islands and live to be about 15-20 years old. They have a large population since they have very few natural predators. They swim up to 50 miles offshore and are protected by dense feathers and a layer of blubber. 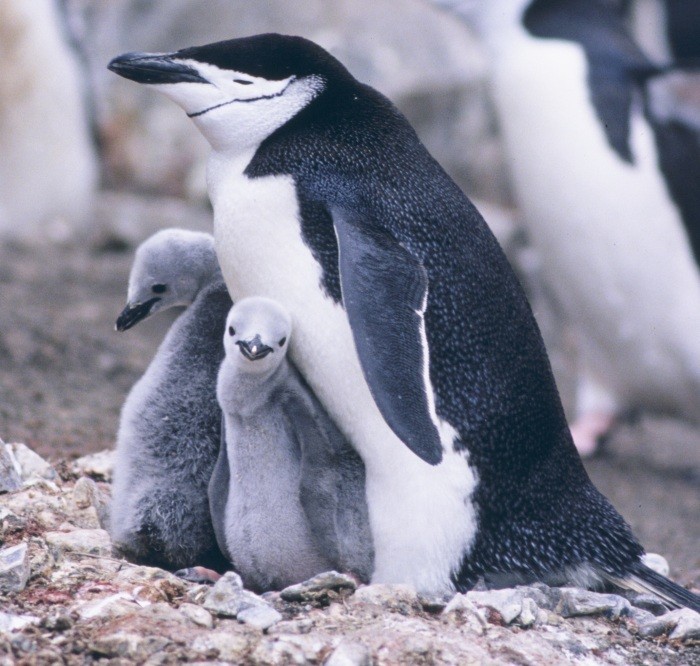 The gentoo penguin is the third largest penguin.  It has a white patch across its head that looks like a bonnet and a bright orangey-red bill. Gentoo penguins lay their eggs on large nests made of stones.  If a male brings a female a nice stone, he can gain her favor. Leopard seals often catch gentoo penquins in the water. Other predators are sharks and killer whales. 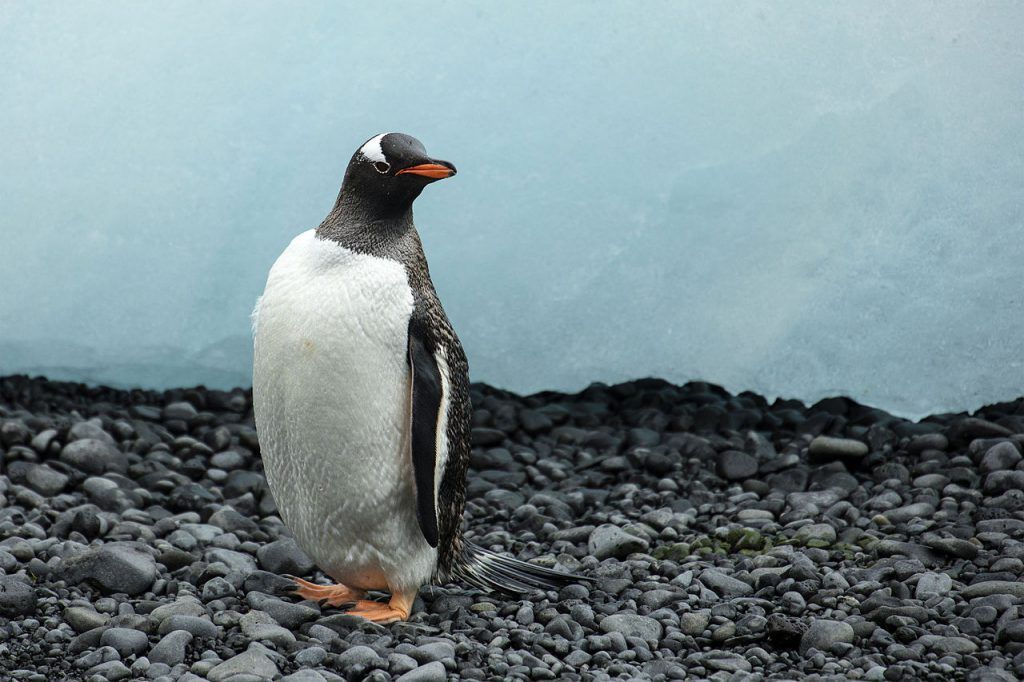 The royal penguin has a white face, and the macaroni penguin has a black face.  But they are related and do resemble each other slightly.

The royal penguin has in the past been hunted for its oil, each bird would produce almost a liter for a hunter.   So this species has become more endangered than others.

In contrast, the macaroni penguin has the greatest population of any penguin type.   It is estimated that here are 18 million in the sub-arctic region. 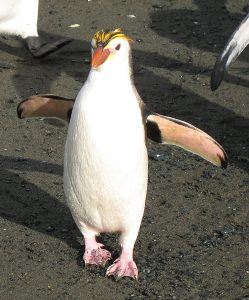 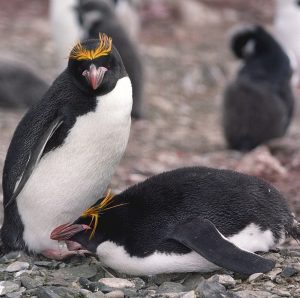 The Emperor Penguin is the largest and heaviest of all the penguins.  They can stand as tall as 51 inches and weigh as much as 100 pounds. This species truly has a majestic appearance, with black back and head, white belly and bright yellow accents in the upper chest and beak. These large birds can stay submerged in icy water for up to 18 minutes, experiencing very deep water, as much as 1700 feet.

It is the only penguin that breeds in the winter months. When this species finds a mate they are faithful for life. 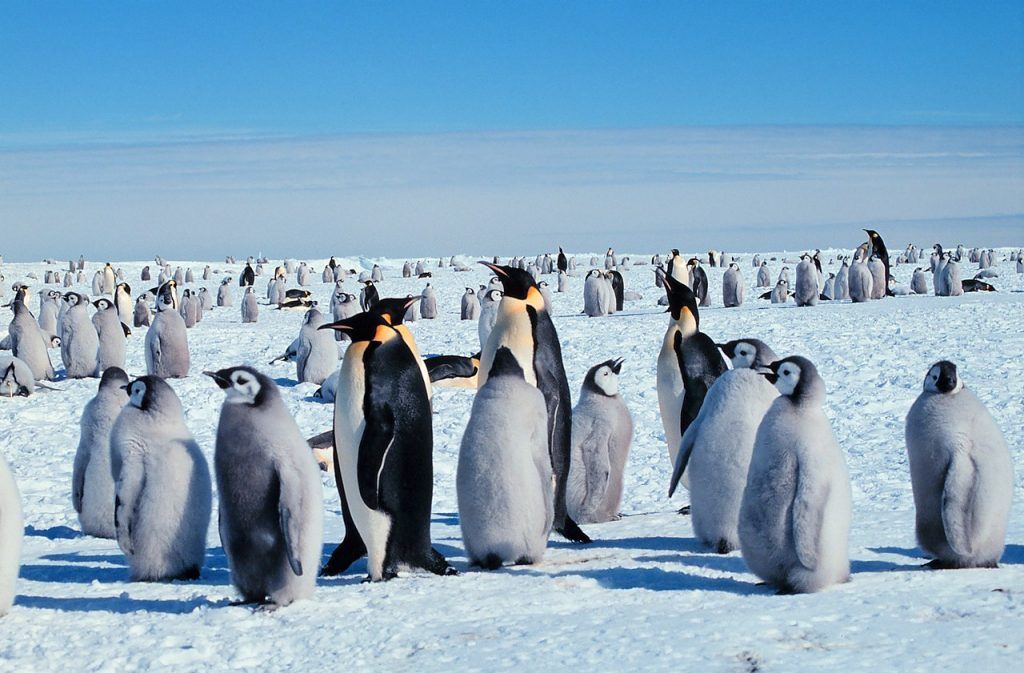 When baby penguins molt, they have a comical look.  Their brownish-grey baby feathers drop off in stages to reveal the smooth black and white adult feathers. 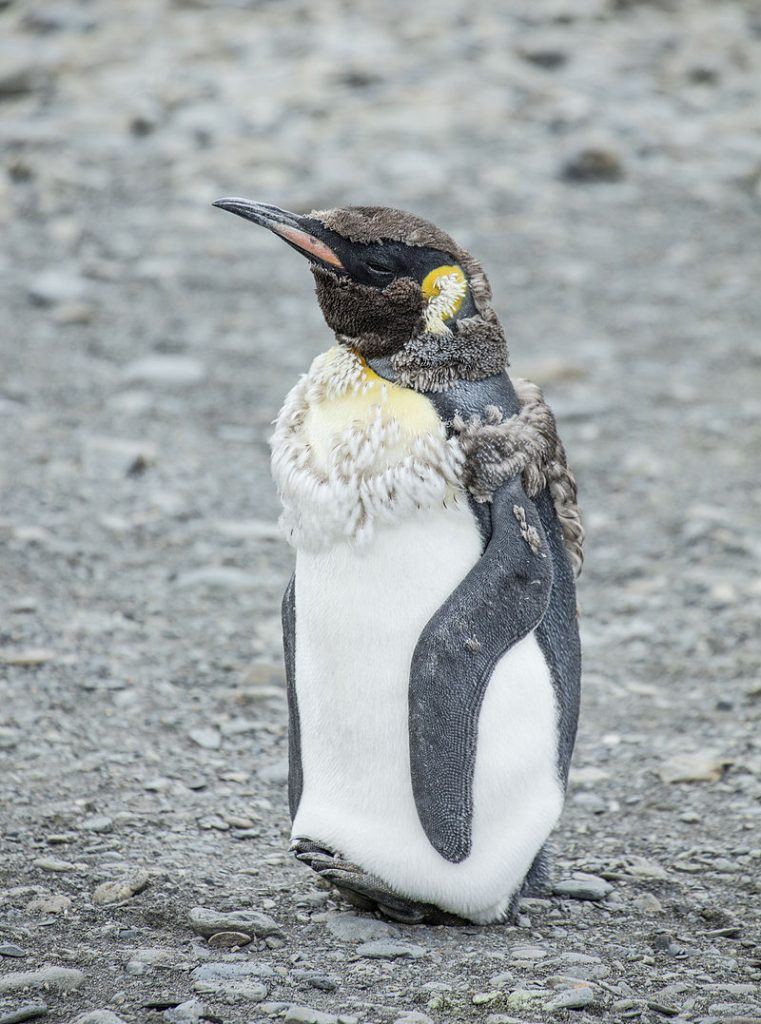 Depending on location penguins can be prey to large mammals, on land and in the water! 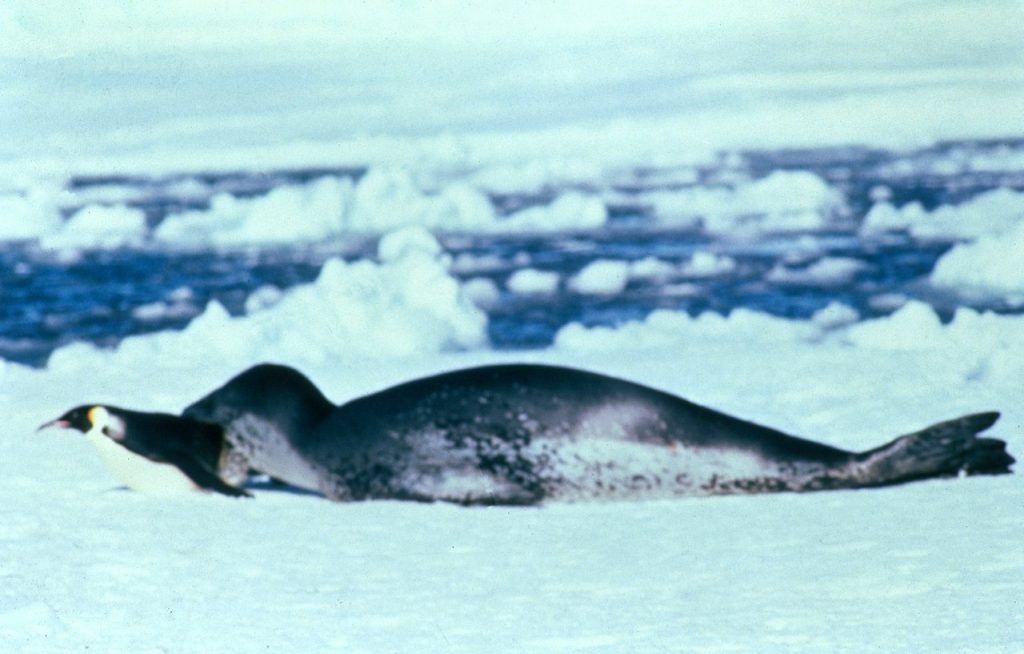 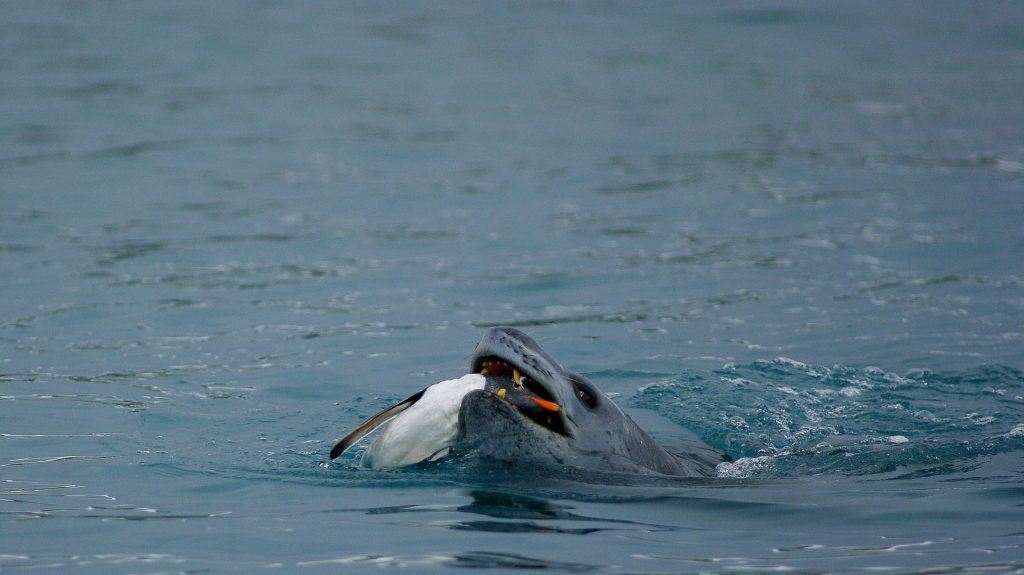 I have used your maps for years in my geography classes and love them. At our combined meetings with our high school the Social Studies teachers make mention of how much more prepared the students are who do them in middle school. I usually start off with the world map and have them shade the coastlines blue so students can differentiate between the water and land. We “build” our maps together for the first couple with me starting them off and then having them complete several parts for homework. Working on the maps helps students with the concept of being neat, spelling correctly, and following directions.