Maps for the Classroom Iditarod Heroes: the Dogs who Race Across Alaska

Dogs  are the  heroes of the world-famous Iditarod sledding event! 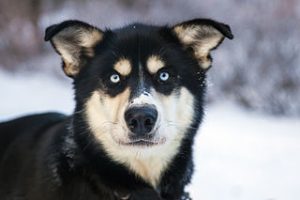 Every March, over fifty teams race through a challenging route in Alaska.

The famous Iditarod race starts in the town of Willow in southeastern Alaska.  It ends far way at the finish line in Nome.  The route is roughly 1000 miles, officially  called “1049 miles”, a tribute to the fact that Alaska was the 49th state to become part of the United States.

The race has follows two different routes, one every other year. The two routes are almost the same except for a 300-plus mile portion in the middle of the race.  Click on this map below to see the rout in more detail! 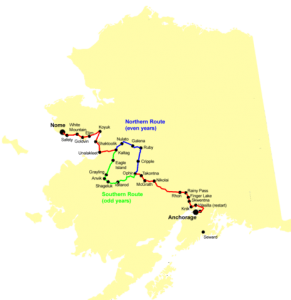 The Iditarod race began in 1973.  The early racers, known as “mushers”, often took many weeks to complete the course with their teams of dogs.   Today racers and their dog teams complete the race between 8 and 15 days.

LEARN MORE ABOUT THIS YEAR’S RACE!

The official Iditarod race website offers a way for the dog-race fan to be involved with the race, even at a distance!  With videos, live coverage, GPS, and stories about the “mushers” and their teams, this official site presents the challenges of the race.  See it  HERE.

The site offers educational extras for students and teachers HERE!

These photos capture some of the highlights of the 2016 race, from the Boston Globe online HERE.

Challenges of the Iditarod race 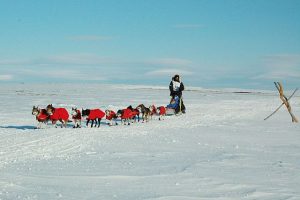 Temperatures range from 50 above zero to 60 below zero

Injuries and/or frostbite for both humans and dogs

Running through thick forest and deep snow without good trails

Gear and transportation can cost over $20,000 a year

The dogs of Iditarod teams descend from many working breeds classified as “freighting dogs”.    In the Gold Rush days of Alaska, goods and mail were delivered by dog sleds on routes too difficult for horses.

Dogs on an Iditarod team are chosen for personality, speed and strength.  The dogs that race are a mixed breed known as an Alaskan Husky.  Often these dogs have genes from other Arctic dogs, like Samoyeds and Inuit dogs. They are a very strong and alert, weighing between 40-50 pounds.  They are known for their the athleticism and endurance.  Often they can look very different from each other.  There is a wide variety of shapes, colors, as well as long and short coats.

Here is a photo of a fine Alaskan Husky (photo Wikipedia Commons).

The genes of the Canadian Inuit dog are part of many Alaskan Huskies. 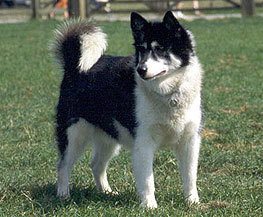 There are three categories in a sled dog team.The smartest and fastest dogs are chosen to run in the front of the pack.  Often these dogs just love to run! Behind them in the line-up are what is called swing dogs.  Swing dogs can direct the team around turns and curves in a trail.  Some dogs are more left-sided than others, so they would be placed on the left of the team.  Wheel dogs or wheelers, run at the back of the team.  These dogs are often largest and strongest of the team.

Every team has extra dogs too, in case of injury or the loss of a dog during the race.  Today’s race would not be possible without the heroic efforts of all these canine athletes.

Dogs must train even in the warm months!  Here is an example of a summertime sled for training. 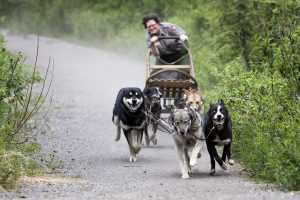 A musher must decide what is the best position for the dog in the team.  Often they are dog breeders trying to develop a line that has the best qualities for racing.

Some breeders share dogs, others have found great dogs at animal shelters.  Often it is not decided which dogs will run in a race until the night before, so that energy and health can be considered.

FOLLOWING THE RACE IN YOUR CLASSROOM 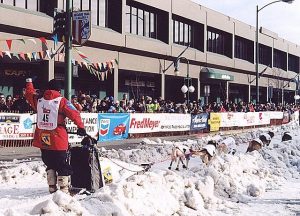 In the classroom, it is great fun to track the course of the race on a large hands-on map of ALASKA.

Students can draw in the route.  they can also label the names of the towns that are checkpoints along the way! 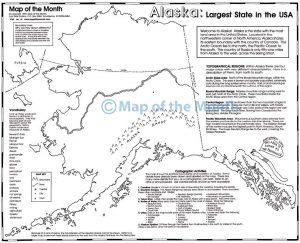 By completing the  activities of the map, students a feel for the geography of the state. 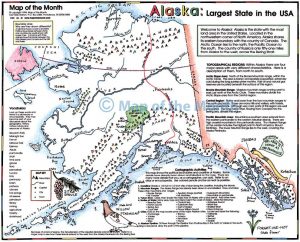 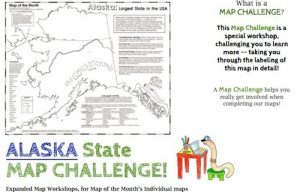 For the past 5 years, I have purchased treasure maps for International Talk Like A Pirate Day and my students have loved them! The treasure maps allowed them the opportunity to use their creativity by designing their own treasure island in full color. Some students distressed their maps by wrinkling them or by rubbing tea on the front to give them an aged effect.