On this detail of our NORTH AMERICA map, we have shown a few ways of using color in different situations.

When shading an ocean coastline, there are a few ways you can choose from, based on what you like and/or what is easiest for you. The various examples are numbered on the map. 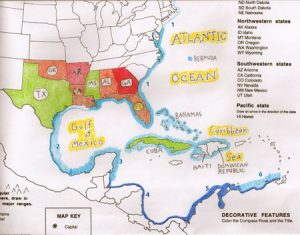 xample 1: Draw a line with light blue parallel to the coastline, then go back and shade it in.

Example 2: Draw a thin dark line in blue along the coastline itself, then shade outwards.

Example 3: Some student cartographers like to draw a shaggy brushstroke type line.

Examples 4 and 5: You can use a thin dark blue line along the coast or a thicker line that extends further out.

Example 6: Use a combination of coloring/shading methods

See examples shown on the map.

To make the labels for oceans and seas stand out, you can use background color behind or around the label.

Always use different colors for adjacent states and countries so each will stand out.
Here we show different ways of the labeling and coloring the states. Look at our various examples, from left to right.

I really, really like your maps! They look pretty impressive when a whole class worth gets put up on display, the students love working on them and are proud of their accomplishment and the maps are a very effective anchor for lessons in geography, history and vocabulary. They are very cool, plus the staff at Map of the Month is great.