Maps for the Classroom First USA map, authored by an American Rogue

The first American-made map has a curious history.

The man who created it was not a cartographer! 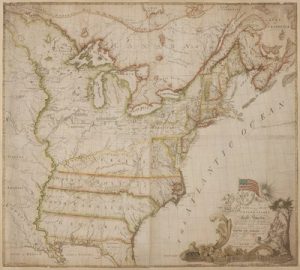 The year 1784 was the official end of the American revolution.  The signing of the Treaty of Paris made the USA a new nation.

In March of that same year, a Connecticut man made history.  Abel Buell was an engraver and created the first US made map of the emerging nation.  It was the first map to feature the American flag.   However, the map was not cartographically correct.  Many of the state borders shown were still up in the air, not official.  The boundaries reflect some of the current day charters, as well as lines that were recognized in the colonies.  It was more of a curiosity than a map known for accuracy!

The map title was long and complex!

A New and Correct Map of the United States of North America Layd Down from the Latest Observations and Best Authorities Agreeable to the Peace of 1783.  Humbly Inscribed to his Excellency the Governor and Company of the State of Connecticut By their Most Obedient and Very Humble Servant Abel Buell. New Haven: Abel Buell, 1784.

Our United Stated Library of Congress owns a copy.  A copy owned by the British Museum was purchased in 1891.  This receipt below shows that along with it, some sea charts were bought at the same time (image courtesy of the British Museum): click on the image to see it larger!

Abel Buell apprenticed with a goldsmith as a young man, learning engraving too.  As a young man, before designing his map, he came up with a counterfeiting scheme to alter currency plates.   He altered the plates for five-pound notes to make bills of a higher amount. Then he printed them and they went into circulation.  Neighbors became suspicious of Buell’s late night activities.  One  caught him printing his fake money on a homemade press.

Counterfeiting was a very serious charge, both in the colonies and the the newly established country.  Many engraved bills stated that “To Counterfeit is Death”.  This four shilling note shows the warning, as did other bills of the time. 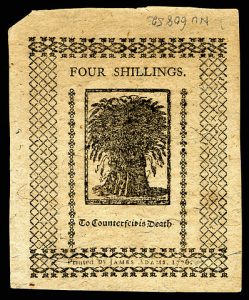 Punishment was harsh for the young Buell.  It  included having his forehead branded with the letter “C,” and having part of his ear chopped off.  He also served a jail sentence.

An historian of the period wrote about the punishment:

‘The tip only of Buell’s ear was cropped off: it was held on his tongue to keep it warm till it was put on the ear again, where it grew on. He was branded on the forehead as high up as possible. This was usually done by a hot iron in the form of a letter designating the crime, which was held on the forehead of the criminal till he could say the words “God save the king.”‘

Buell was a man of many skills, a jack-of-all trades.  He continued to work as an engraver.  And he was known to be an inventor of minting machine that made coins for his native state of Connecticut.  He was credited with creating one of the earliest cotton mills in the US.

As his most famous accomplishment, he produced the first American printed map of the USA.  Unfortunately, despite his many talents, Buell was not a financial success and ended his days in an alms house.   A sad end for this American rogue.

Classroom map of this period in time

A map of the original Thirteen Colonies is useful for early American history studies.  Students see the boundaries of the colonial years.  They  can also recognize what was happening around Buell’s time.  See one HERE that might prove useful in your classroom! 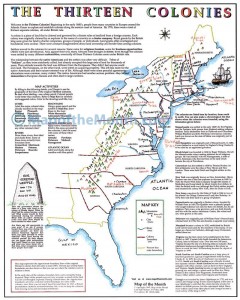