Maps for the Classroom February 16th: the Opening of King Tut’s tomb

February 16th is a famous day, known for the opening of the tomb of the ancient Egyptian King Tutankhamen.

In November of 1922, British archaeologist Howard Carter used a chisel given to him by his grandmother on his 17th birthday to scrape away  debris from the doorway of an Egyptian tomb.  Who knew that her simple gift would bring the rich ancient past into the 20th century? 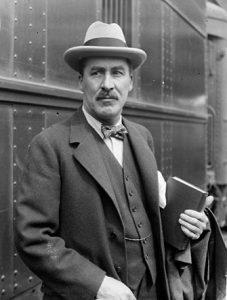 In the next year 1923, Carter and his team had made their way inside the tomb.  On February 16th, Carter opened door the burial chamber of what was to become one of the world’s most famous discoveries.  It was the priceless tomb of the young Pharaoh King Tut.   Priceless for the valuables it held! —  and beyond rich for all the historical information it revealed!  (Credit: Wikipedia Commons) 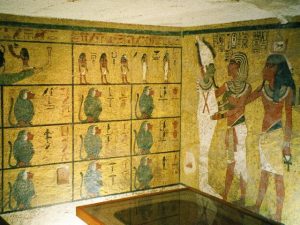 Valley of the Kings

For almost 500 years, from the 16th to 11th century BC, tombs were dug in Egypt for Pharaohs and noblemen.  One of the most famous areas is now known as “The Valley of the Kings”.  Bodies were preserved in the rock chambers which were filled with the necessities– and valuables!– for living in the afterlife.

These tombs were further south along the Nile, in a different area than the pyramid burial chambers near Cairo. This is a detail from a map of ancient civilizations  showing the location of the Valley of the Kings. 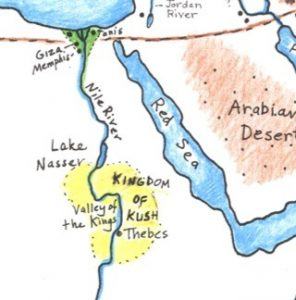 Here is a photo of the Valley of the Kings, a large area in Egypt where many tombs were uncovered (Credit: Wikipedia Commons).

Since tombs were often filled with riches, many over the centuries were looted by robbers.  But with Howard Carter’s luck, the tomb of the young King Tut was found in excellent condition.  Here is a map that shows the various locations of tombs in the Valley of the Kings. 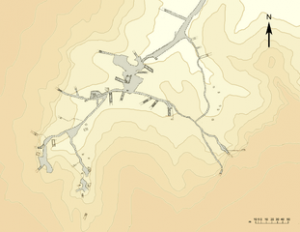 Many of the tombs of ancient Egypt had been already discovered by  the 19th century.  Archeologists from all over the world had already flocked to Egypt.  There they uncovered a number of these amazing chambers.

Even after most of the tombs had been uncovered, Howard Carter felt there was one more.  Where could it be?  After over 5 years of searching, Carter had finally found his undiscovered tomb:  it bore the named of the pharaoh Tutankhamen.

In November of 1922, Carter found there was a stairway, leading to a long slanted path.  On February 16, 1923, Carter and officials of the area made their way into the last chamber.

The tomb was considered the best preserved and most intact tomb of a pharaoh ever found in the Valley of the Kings.  King Tut’s tomb had four main rooms; an antechamber, annex, burial chamber, and treasury room.  It was only one of two tombs that had not been robbed of its treasure.  King Tut’s sarcophagus was actually three coffins nested inside one another. His mummy was found in he last coffin of solid gold.

Here is a photo that was restaged one year after the tomb was open, to show how it looked on the day Carter and his team made the huge discovery.  People wanted to peek into the event, since no photos of this quality had been taken.  The photo remains popular even today! 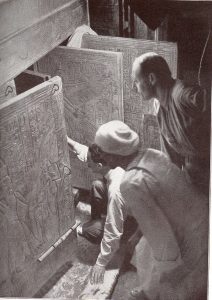 Tutankhaman’s tomb was important because researchers learned a lot about the pharaoh and how he and other people lived.  What a discovery– the tomb had remained sealed for more than 3,200 years!

It took nine more years, until 1932, to catalog all of the riches found in the tomb.  There were priceless treasures — about 5000 pieces!  The bounty included jewelry, weapons, and clothing for the deceased king. There was also a chariot! We can view all these treasures today in a permanent exhibit in the Egyptian Museum in Cairo.

The tomb was considered the best preserved and most intact tomb of a Pharaoh ever found in the Valley of the Kings.  Here is the gold death mask that was found in the innermost layer. 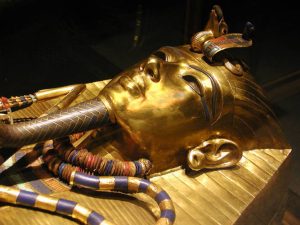 Here is a bust of the young Tut, which was found in the tomb. 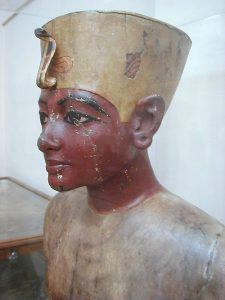 Sometimes comes alive for students when there is a story that goes along with it.

Here are some great links to learn more about King Tut, who was a young man when he died.    Click on these links for more of this fascinating story!

The layout of the tomb itself, now known as KV62: HERE and HERE

Valley of the Kings: HERE

Luxor (Thebes in ancient times) home to tombs on the Nile: HERE

An ancient civilizations map for use in the classroom: HERE 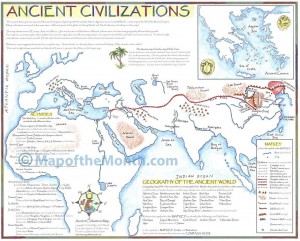 Our third grade students use the Treasure Map in conjunction with one of the novels they read. After they read the novel, each student creates his/her own treasure map. I had the opportunity to see them this year, and some of them were quite spectacular.