Maps for the Classroom Deserts of the World: Sahara

Deserts are the driest places on Earth.  We tend to think of deserts as torrid sand covered locations.  Deserts can also be bitterly cold, with snow and ice.

Humans have always found it challenging to live in desert environments.  People have lived at the outer edges of many deserts where agriculture and raising of animals is possible.

Often  people who live in arid areas are forced to be nomads.  Moving from place to place, nomads take advantage of seasonal weather.  A surprising number of plants and animals have adapted to the harsh inhospitable conditions of both hot and cold deserts.

The definition of a desert is that it receives less than 10 inches of precipitation a year: that precipitation can be either rain or snow. Often people think of deserts as only sand, with rolling or wind-blown dunes.   It may come as a surprise to you that the surface of a desert can be formed not only of sand, but also ice, small stones or large rocks.   Dunes can also be made of snow: many can be found in the Antarctic Desert. 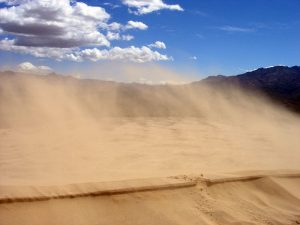 Sand blowing on the Kelso Dunes in the Mohave Desert. 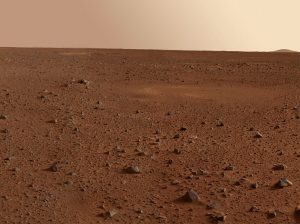 Deserts have been located in outer space as well.   This photo image was taken by the camera onboard the Mars Exploration Rover Spirit, capturing  the desert-like rocky surface of Mars.

This satellite image allows us to see how vast an area the SAHARA DESERT covers in northern AFRICA. 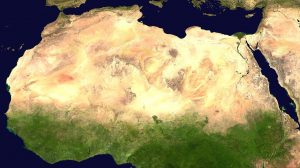 See the contrast between the tan coloration of the sandy desert with the green more verdant areas to its south!

By comparing this image to our map of AFRICA, you can see how many African countries are located in this huge area.  The Sahara extends from the Atlantic Ocean in the west, to the Red Sea in the east.

The Sahara also has the Mediterranean Sea at its north.   The huge Sahara is separated from the Mediterranean Sea and the Atlantic Ocean by several mountain ranges, notably the Atlas Mountains.  Moisture that drifts in from the water rises and condenses before it can reach the other side of the mountains.   The area beyond the mountains remains very dry.  Often this a called a “Rain Shadow.” 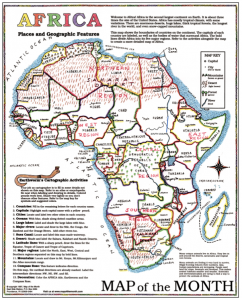 YOUR STUDENTS IN THE SAHARA DESERT!

We have a free digital file on our website that details many features of the Sahara Desert.  Find it HERE, as part of our larger CartoCraze! Expanded Map Workshops.  Students can learn all about the Sahara: geography, history, wildlife, nomads, and more.  The file includes a reading list and some engaging writing exercises too! 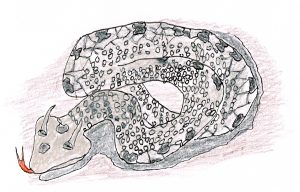 Here is just a snippet from the information in this SAHARA file about the Horned Viper!

“The desert horned viper, found in the Sahara, is the most commonly found snake in North African deserts. This species dwells in sandy habitats, and prefer temperatures that range around 68 degrees Fahrenheit.  The sandy terrain of the desert provides camouflage while hunting prey (such as rodents, birds, and small reptiles). The snake can even sink into the sand to disguise itself. Another hunting advantage can be found in the vipers most distinguishable feature, the set of horns located above its eyes….”

Check out this valuable resource on our site when you are studying the continent of AFRICA, or African countries.  Your students will enjoy the range of easy to understand, captivating information.