Maps for the Classroom A Covered Bridge, Around the World

Covered bridges are an interesting curiosity around the world.

A bridge with a roof is truly unique!

A covered bridge is most often made of wood.  A wooden bridge, open to the elements, would not last long.  Wind, rain, snow and inclement weather can shorten the life of a wooden bridge.  Over time, protective coverings became part of the design of wooden bridges. 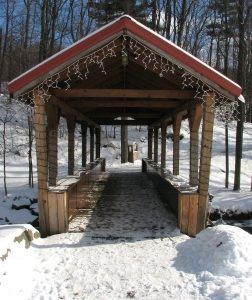 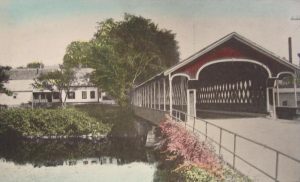 Covered bridges are often in rural areas, connected to narrow roads.   Sometimes coverings were made to protect pedestrians.  In the country, a covering on a bridge keeps horses calm, so they will not be startled by the water. 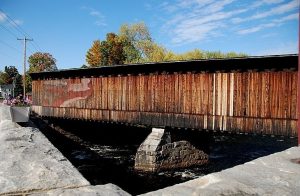 Covered Bridges have a unique structure

A covered bridge is considered authentic not because of its age, but by the way it is built.  An authentic one is constructed using trusses rather than other methods such as stringers (a popular choice for non-authentic covered bridges).  Often this kind of building technique is used for larger buildings.  The use of trusses makes it more stable.  Trusses support both for weight as well as the stresses of weather.  In China, covered bridges are called “wind and rain bridges”! 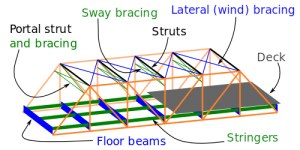 The Baumgardener’s Covered Bridge, over the Pequea Creek in Lancaster County, Pennsylvania has trusses as well as steel hanger rods. The lower deck part of the bridge is made from heavy oak planks. 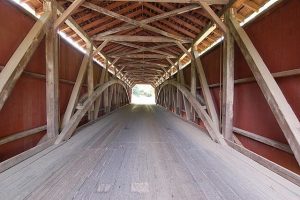 Most Americans think of covered bridges as unique to the Northeast, as many are located in New England, like the one below.  It is a very plain, unadorned one in Newport, New Hampshire.  You can also see a more decorated one in Frankenmuth, Michigan! 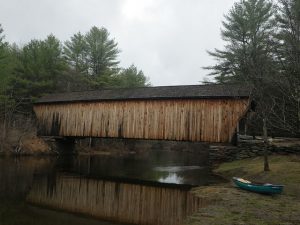 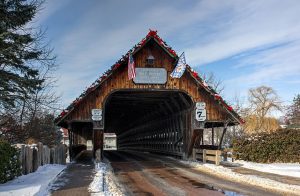 Covered bridges are located all over the world.  Each area has its own style and look.  Some are spare, with little detail.  Others, like those in Asia, have lots of interesting visual features!

The Xijin Bridge is the largest in Zhejiang Province, and one of the largest in China.  It is made with both stone and wood, and has a beautiful central roof pavilion-type detail. 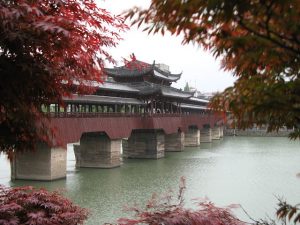 In Kotohira Japan, the beautiful Saya Bridge has an arches structure and impressive layered roof sections. 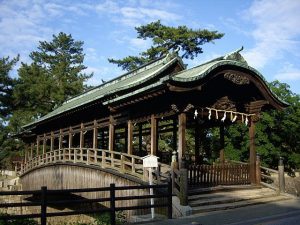 The Lovech Bridge in Lovech, Bulgaria, is truly unique.  It features 64 different shops inside its structure! 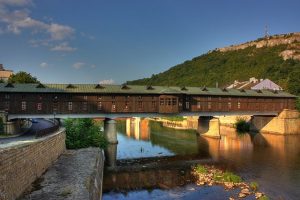 Here at Map of the Month/Maps for the Classroom, we are located in little Rhode Island, the smallest of the US states.   Here there is only one covered bridge.  The Swamp Meadow Bridge, shown below, is in the town of Foster.  This modest bridge is certainly simpler and less details that other covered bridges around the world, like the one shown below it, from  Kapellbruecke, Luzern. 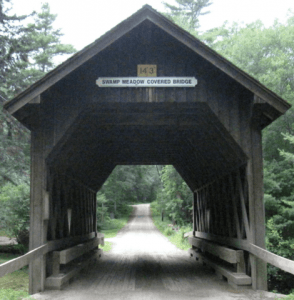 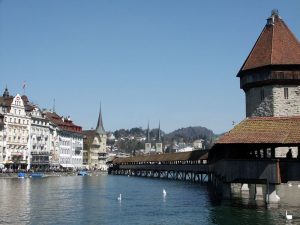 Covered bridges near you, and in the classroom!

If you are a teacher, have your students try to locate the one closest to your location!  Or a fun activity can be to have them mark the location of famous American bridges on a USA map.  Maybe your students would have fun designing one– choosing a local location and drawing their ideas on paper!

I found using the World Explorer map while studying European Explorers to be extremely useful. It allowed the students to put into perspective the miles traveled and the lengths countries went to to add land to increase their power. I also loved the fact the students were labeling parts of the world they may have never heard of before.